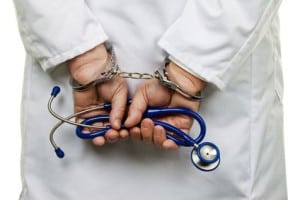 According to a recent indictment, a pediatrician from Monterey Park has been accused of providing prescription medications to adults who have no legitimate need for the medicine. The pediatrician, Dr. Thomas Lin, operates Kid’s M.D., a pediatrics clinic on Atlantic Boulevard. Dr. Lin and two of his employees face serious penalties as they have all been implicated in the 55-count indictment.

Dr. Lin’s charges arise from undercover investigations performed by the Medical Board of California. The representatives allege that they received the drug in question (Phentermine) without encountering any significant resistance from Dr. Lin and his staff. The undercover investigators claim that there were instances where Dr. Lin’s office provided the medication without a medical exam.

In addition to allegations of illegally providing medications, Lin also faces multiple counts of insurance fraud. It is alleged that Dr. Lin billed Medi-Cal as well as other insurance companies for providing services to patients that were never received. If convicted, Dr. Lin could potentially lose his medical license and be ordered to serve time in Jail.

SHOULD DOCTORS GO TO PRISON FOR ILLEGAL PRESCRIPTIONS?

Now more than ever, doctors are being prosecuted for providing healthy patients with medications that they do not need. The line that separates a healthy patient from a patient that needs a medical prescription has become increasingly blurry. The number of prescription pill abusers has risen drastically over the last few years. Many of those who abuse prescription medications present themselves in a way that can trick doctors into believing that a drug addict is actually a person with a genuine need for prescribed meds.

In this particular instance, undercover investigators from California’s Medical Board posed as patients in an effort to determine whether or not the doctor in question was acting outside of his obligations. How the investigators presented themselves, as well as whether or not they claimed to be suffering from a legitimate medical ailment, is unknown.

One thing is for certain: charges against doctors for providing illegal prescriptions and acts of insurance fraud are on the rise. Is the increase a sign that law enforcement officials are trying to curb instances of prescription pill abuse at the source? Are doctors now being targeted as if they are drug dealers? If so, is the message that we are sending to those in the medical industry one of warning or discouragement?

THE RISE OF PRESCRIPTION PILL ABUSE

Many people are unaware of just how dangerous prescription pill abuse has become. The number of people that abuse prescription pills have risen dramatically over the last decade. Refer to the following graphic for in-depth information about prescription drug abuse in the U.S. and the associated dangers.

Medical professionals facing charges for illegal prescriptions or insurance fraud in California are encouraged to contact our law offices for a free case evaluation. The call is free and the information you receive may help you to avoid having your medical license suspended or revoked. Call to speak with a skilled criminal defense attorney about your case.