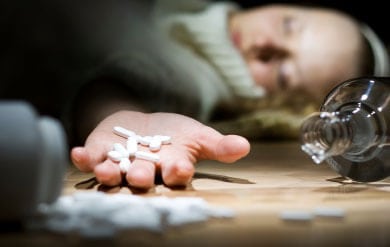 Drugs keep us alive. They kill bacteria, block pain, and ease the burden of depression. At the same time, drugs can kill. An overdose can turn a beneficial drug into a deadly drug. More people between the ages of 25 and 64 die from drug overdoses than from traffic accidents.

Whether a drug is legal or illegal, available by prescription or sold over the counter, often has little to do with its lethality. Here’s a look at the most dangerous drugs that are commonly available in the United States.

Some drugs, deemed dangerous by policymakers, cannot be sold legally. They cannot be prescribed by doctors since policymakers have decided that the drugs have no recognized medical benefit. Sometimes (as in the case of marijuana, which remains illegal under federal law) those decisions are the result of poor judgment. In other cases, the drug poses a true threat to the life of the person who takes it.

Drugs that cannot legally be prescribed, sold, or possessed are listed in Schedule I of the federal Controlled Substances Act. Just how dangerous they are is often subject to dispute. Experts disagree as to whether LSD, Ecstasy, and peyote are likely to have harmful psychological effects upon people who use them, but (setting aside horror stories about LSD that were popularized fifty years ago) few people consider those drugs to be killers.

Heroin is the most dangerous Schedule I drug that is readily available. Thousands die each year from heroin overdoses. Since heroin is typically cut with other substances by street dealers, it is difficult for users to judge a correct dosage. Recent years have seen a marked increase in deaths from heroin overdoses.

As risky as it might be to use heroin, more deaths each year are caused by prescription opioids. Prescription pain killers can become people killers if they are not taken as prescribed. Morphine is an example of a prescription opioid but morphine tends to be prescribed to patients suffering from a terminal disease. Powerful drugs more commonly prescribed for pain include oxycodone (marketed as OxyContin and Percocet) and hydrocodone (marketed as Vicodin, among other trade names).

Some opioid overdoses result from people who take the drug illegally to get high. Illicit users of OxyContin often chew the drug to defeat its time-release formula. That’s a dangerous practice that can end with a trip to the emergency room or, in some cases, to the morgue. Other opioid overdoses are accidental. They tend to occur when patients do not feel they are getting sufficient pain relief and take extra doses to compensate. Opioids are also a popular choice for people who want to commit suicide.

Cocaine is a prescription drug that dentists and surgeons use as an anesthetic before performing certain procedures related to the mouth or throat. Cocaine is also commonly used as a recreational drug. Like heroin, the purity of cocaine is difficult for a user to judge because street dealers cut it with other substances to increase the quantity that they can sell. Cocaine overdoses can be fatal when they lead to heart attacks, seizures, or respiratory failure.

Methamphetamine is another prescription drug that is widely abused by illicit users. They typically ingest methamphetamine that has been “home-brewed??? in someone’s garage. Those who are most at risk for an overdose include new users who have not developed a tolerance for the drug and those who, after withdrawing, use the same amount that they consumed before they stopped taking the drug. Stroke is the most common cause of death, although brain damage leading to severe dementia might be even worse than death.

The drugs responsible for the most deaths are, not surprisingly, the most widely used. Despite health warnings on product labels and decades of public education, tobacco remains one of the deadliest of all drugs, accounting for 480,000 deaths annually. About 42,000 of those are caused by secondhand smoke. People who smoke, on average, die ten years before people who do not smoke. According to the Center for Disease Control, smoking tobacco is the leading cause of preventable death in the United States.

Alcohol is not as deadly as tobacco, but it is still responsible for more deaths than prescription opioids, heroin, and cocaine combined. The 29,000 annual deaths from health problems related to alcohol consumption tell only part of the story. The death toll triples when drunk driving accidents and alcohol-related violence are added to the total.

Lawmakers tend to focus on the illegal use of drugs, relying on the criminal justice system to solve a public health problem. That policy has been a failure. The focus should be on raising awareness of the danger that all drugs, legal and illegal, can cause when used irresponsibly or (in the case of tobacco and its secondhand impact) when used under any circumstances.